Get fresh music recommendations delivered to your inbox every Friday.
We've updated our Terms of Use. You can review the changes here.

by DISCHARGED BY DEATH 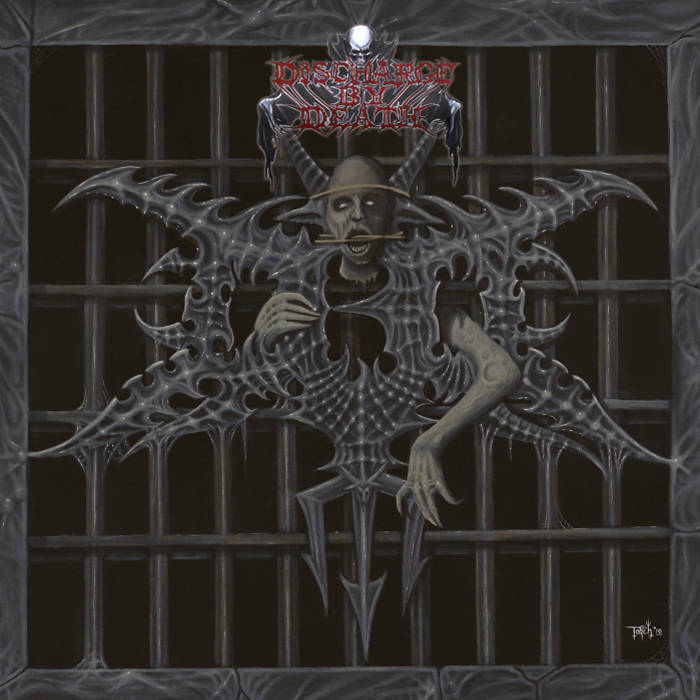 SOC The only death metal band who can legitimately say they sing about stuff they'd actually do.

"Discharge By Death" was spawned inside Americas prison system.
They spent years writing and putting down their brand of Brutal Death Metal.
Many Perils, and pitfalls have they endured to finally be able to put out their first album.
In prison you never know what's around the corner. Anywhere from stabbings, fights, lockdowns,
to getting snitched on, and all out being hated on. They've all managed to come full circle,
to end up here. To finally be able to get their "Death", busted through these walls, into your ears.
They want to piss off the Law and scare old Ladies. They refuse to be condemned to this ill-fated existance.
So they've dedicated all of their resources, mentally & physically, to immerse themselves,
into the twisted and chaotic world of D.B.D.

It all started when "Torch" picked up a life sentence for burning a man to death in 1990.
Tattooing his way through prison, he started doing Artwork and paintings for the scene.
Doing work for bands like Bastard Saints, Lividity, Ingurgitate, Severance, Bloodsoaked, Splattered Cadaver
and Supreme Pain, to name a few. Purely out of love for Death. "J-Sin hit the system in 1998, barely missing
the Death Penalty, by picking up a life sentence plus 34 years for 1st degree murder. In 2000 he ran into
"Torch" and another cat named "Worm". The 3, sixes, were born. "Discharge By Death" (called Goatvomit) had begun.
J-Sin being the only one with musical experience, Got the ball rolling, and put the burr into "Worm",
and "Torch's", Asses. But shortly after the beginning, "J-Sin" was locked-up and placed into Administrative Segreagtion.
For Extortion and a planned assault against a staff member, which got him almost 3 years in the hole.
(Meanwhile, "Torch" and "Worm", kept the flame a-lit, and proceeded to make Death metal the best they could)
As luck would have it, J-Sin, ended back up in the same prison where it all began. The 3-sixes were "one" again.
Shortly after that, tragedey struck again, and all 3 were locked up again. This time for Threats against a Warden,
and attempted escape. "Worm" got the worst of it, "J-Sin" and "Torch" were found innocent of all charges, in 2004.
The next year they went through various guitar players, and bass players, vocals, but none stayed or could cut the mustard.
In 2005, They picked up "Rodney (Dirty Sanchez) Sanchez". He played the bass in D.B.D. for a couple of years.
Meanwhile he was secretly honing his guitar chops.

Now the Dual guitar - smash you in the fucking face - Kick you in the fucking balls - assault,
had begun. So they picked up a new bass player and kicked him out for being a total pussy.
His name is "Pussy Paul" (you know who you are Lover of small penis.)

So here they are now, the 3 of them have re-written old songs, and written new ones, and have blasted these walls
and halls with Their brand of Death metal. They went through several names, and landed on one "Discharge By Death"
or D.B.D. The name comes from, what the Department of Corrections, puts next to your name on your discharge papers,
when you die in prison. Both "Torch" abd "J-Sin" are doing forever. Dirty Sanchez is doing so much time he might
as well be. They found much meaning in the name. This shit is real. Over the years they've recieved many donations
from their Brothers who've supported them with equipment, and finances, and support. This album is 100% Bootleg.
It was recorded under the radar, and was snuck out, without any Cops, Staff, or Wardens knowing. It can't really
be explained how difficult it was to accomplish this feat! You might understand if you've done time yourself.
The you'd have a new found respect for this Album and Band. It was recorded with 24-track recorders, Written, recorded,
and created all by themselves. So they haven't succumbed to this inevitable fate. Instead they've become free,
through D.B.D. So keep this in mind when you flood your ears with the one....The only.....

Appeard in underground scene to support brutal death metal and many more since 2002. Brute! is still the most brutal sound you lived with.

Bandcamp Daily  your guide to the world of Bandcamp